I call this post useless but that's only true for those readers that weren't fortunate enough to be playing video games in the early 90s.  In 1992, Capcom released Street Fighter 2, which had the first female character in a fighting game (thanks wikipedia).

The character was Chun Li, 春丽 (chūn lì) which translates as Spring & beautiful.  (and I am pretty sure there were some 13 year olds that would have agreed with that.)

I got most of this information off the Wikipedia Chun-Li page.  In the game, Chun Li was a Chinese Interpol agent seeking revenge for her father's death. 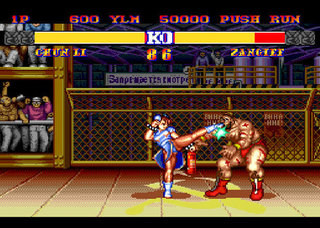 Because Chun Li was Chinese, even my Mandarin teacher was able to figure out what I was asking about after I did a really bizarre explanation of her signature move, the Hyakuretsu Kyaku (百裂脚 lit. Hundred Rending Kicks).  Don't ask. 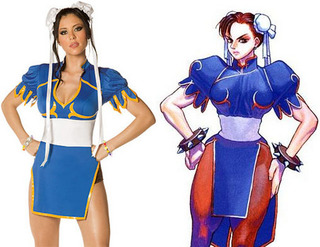 Her outfit has inspired a wide variety of costumes, which you can see on Google image search.  From wikipedia:

In the Street Fighter II sub-series, Chun-Li wears a qipao, an early 20th century Chinese dress... The dress is modified to allow a far wider range of movement than a generic qipao. Her ensemble also includes a pair of white combat boots and brown pantyhose. Chun-Li famously wears her hair in "ox horns"; she wears silk brocades and ribbons in her hair, signifying the mourning of her father. Another familiar part of her ensemble are the large spiked bracelets she wears on her wrists.

Since this will probably be the least-useful Chinese you ever learn, here's how to say useless in Chinese - 没用 - méi yòng.  Maybe that will salvage this educational trainwreck.

"Giggle" was always on at my house when playing DOA.

I was a Kasumi fan when DOA came out in 1996  http://en.wikipedia.org/wiki/Kasumi_(Dead_or_Alive)

Nice, glad you share an appreciation of the Random. 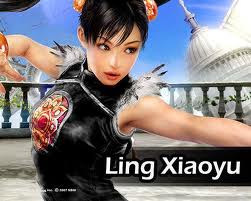 Comment by Niel de la Rouviere on March 30, 2011 at 6:45pm
Aha. That's actually awesome. 不是没用！Prompted me to check up my other favourite Chinese fighting chick from the Tekken Series and how her name is written in Chinese. Ling Xiaoyu - 凌 曉雨. Pretty cool!