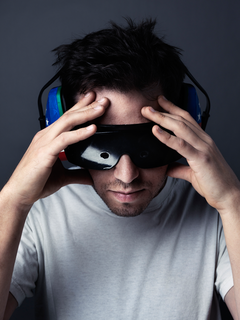 I wanted to share this article that was on the nytimes recently, highlighting the techniques that "memory athletes" use.  The article is interesting but especially relevant for remembering Chinese characters.

Basically the idea is to use famous people, weird stories and very detailed physical places in the real world to store information you want to remember.

Excerpt below about the technique.

From New York Times - Secrets of a Mind-Gamer

The answer lies in a discovery supposedly made by the poet Simonides of Ceos in the fifth century B.C. After a tragic banquet-hall collapse, of which he was the sole survivor, Simonides was asked to give an account of who was buried in the debris.

My trainer and all the other mental athletes I met kept insisting that anyone could do what they do. It was simply a matter of learning to ‘think in more memorable ways.’When the poet closed his eyes and reconstructed the crumbled building in his imagination, he had an extraordinary realization: he remembered where each of the guests at the ill-fated dinner had been sitting. Even though he made no conscious effort to memorize the layout of the room, it nonetheless left a durable impression.

From that simple observation, Simonides reportedly invented a technique that would form the basis of what came to be known as the art of memory. He realized that if there hadn’t been guests sitting at a banquet table but, say, every great Greek dramatist seated in order of birth — or each of the words of one of his poems or every item he needed to accomplish that day — he would have remembered that instead. He reasoned that just about anything could be imprinted upon our memories, and kept in good order, simply by constructing a building in the imagination and filling it with imagery of what needed to be recalled. This imagined edifice could then be walked through at any time in the future. Such a building would later come to be called a memory palace.

The funny thing here is the question of vividness.  A lot of my Hanzi associations are not available for passing around simply because they're pornographic -- but they work for me,and the rest of you can go make up your own. :-)