Places to go in China -Part 2

Ok we saw the video from 九寨沟's sceneries last week.

If you haven't, you can check in out by clicking here!

Now if you're ready, let's go and take a look at another must-see-place!

You've most probably heard this place but it's spectacular so I must mention it again! 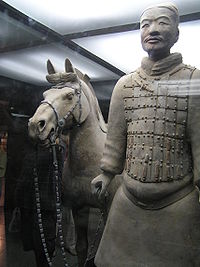 It is Chinese Qin Dynasty Emperor Qin Shi Huang's tomb situated at Xi'an (known as Chang'an before Ming dynasty) and it's one of the oldest city in Shaanxi province in China.

Qin Shu Huang ascended the throne when he's 13years old, and he started to build his own tomb right after.

Total mausoleum area of the Qin Shi Huang  is of 50 square kilometers, including the Qin Terracotta Warriors and Horses and the Mausoleum of the First Qin Emperor.

The figures vary in height according to their roles, with the tallest being the generals. The figures include warriors, chariots and horses. Current estimates are that in the three pits containing the Terracotta Army there were over 8,000 soldiers, 130 chariots with 520 horses and 150 cavalry horses, the majority of which are still buried in the pits. Other terracotta non-military figures were also found in other pits and they include officials, acrobats, strongmen and musicians.

Terra Cotta Warriors and Horses is listed as World Heritage Site （世界遗产名录） in 1987 and it's also labeled as one of the Eighth Wonder of the World （世界第八大奇迹）!

Let's look at the video! Enjoy!

go to https://www.youtube.com/watch?v=0RYysyDurJ0&feature=related if the link is not working for you!

Hi there!  I'm in fact very fond of histories and especially places like this, hence my post about it :)

it's too bad we can only see the clay colour on them now, I'm hoping someday if the party involved will have the technology to be able to keep the colours.

the video is just part of it, looking at the videos and standing at the site is a very different feeling and experience! Do share your experience with us after your visit!

It's worth mentioning they all have individual faces and expressions. They are not just carbon copies one after the other. (Sorry to go on; I'm rather fond of history.)

I wrote a paper on these while at Uni & saw a marvellous display at the British Museum. They really are quite a spectacle. My parents went to the sites in Xi'an & have praised them greatly, so I'll be making a trip to see them for sure.

The ones still in the pits wont be dug up until we have the technology to preserve them. When the current figures were originally dug up they were painted in magnificent yellows, red & greens. The atmosphere quickly  deteriorated those colours leaving us with the dry clay colour we now see.

They are great artefacts & a wonderful part of Chinese heritage. There's a lot to discover about them!