Mandarin is not so difficult to learn 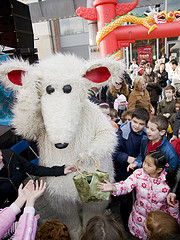 Mandarin is increasing in populiarity because of the China is getting stronger and stronger and take a more and more important role in the world, also because of its long history and exotic culture.

Some people think Mandarin is the most difficult language to master. Well, as an experienced and professional Mandarin teacher, I'm presenting few points here to prove that Mandarin is not that difficult.

1. Pronunciation
Like other languages, Chinese also has a alphabet of which pronunciation is very similar to the world language English. The only difference is that Chinese is a tonal language and it has four tones which is not so hard to master through practice

2. Characters and words
Chinese syllables are represent by characters and some people may think that it's hard to write Chinese characters.Well, actually you don't need to know how to write Chinese characters if you just want to speak Chinese. You just need to recoganize them, but Chinese calligraphy is a kind of art and a lot of foreigners may be very interested in learning it.
Since Chinese syllables are represent by characters and each character is unique and may never change its form , so Chinese words never change their forms,such as nouns from singular to plural and verbs change their forms in difference tenses and so on which never happen in Chinese.

3. Grammar
Chinese grammar is a lot easier than it in English and many other languages for there's no tenses, no changes of verb forms in Chinese which is acheived by adding a specific particle(character) to the sentence. So you just need to memorize the function of some specific particles. You don't have to change the form of the verb in every sentence.In Chinese, you just need to know one particle for each grammar point.

You may also be interested in these others articles on the Study More Chinese Blog:

Is a passion for China an unstated requirement to be fluent?

I learnt a little German, a little Greek and a little Japanese in the past. All great ln languages but I guess I never was put in a situation where I had to use them, so they've pretty much disappeared.

so what other languages have tried to learn? I cannot speak for native english speakers but as far as I know Chinese people do dot care to much about grammar. if they can get you, it means your Chinese is good enough ;)

I definately found Chinese grammar a lot easier than other languages!