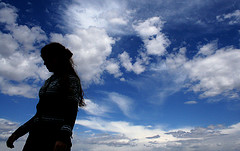 Last time we took a look at how to say, "How are you doing?" in Chinese.  If you missed that discussion, take some time to go back and check it out.

Today our friend is telling us about someone else and we are asking, "What does she look like?" Here is the question and answer:

Asking what someone looks like in Chinese isn’t too hard despite the fact that the question doesn’t resemble the English at all.  This is one of those cases where the Chinese makes more sense than the English.  The English question, “What does she look like?” is obscured a bit.  If you were trying to learn English, you might expect to hear an answer comparing the person with a noun, not an adjective:

In comparison, the Chinese question is a lot more logical.  Let’s take a look.

The word 她(tā) means “she.”  (Note: the masculine “he” has the same pronunciation but uses a different character, 他)  The next word,

长 (zhǎng) has a few meanings, but here it would literally mean “grow.”  The character

得(de) is a particle and it has no meaning here.  In the question it is used to connect the verb with the adjective to tell how the “growing” is done (in this case, the growing is pretty.)

得(de) the meaning is “looks like” or “appears.”  We looked at

怎么样(zěnmeyàng) in detail in question #16, so there is no need to go over each character again individually.

go back and check it out. The word

怎么样(zěnmeyàng) just means “how” in our question.  When you put it all together you get something like, “She grows how?” or “She looks/appears how?”  Now let’s go on to the answer.

The answer gives the information you’d expect (a subject and an adjective to describe it) but Chinese is unique when it comes to adjectives.  We start out with 她(tā) which means “she.”  The next word is 很(hěn) which means “very.”


But what makes Chinese different is that it doesn’t use a form of the word “to be” with adjectives.  For example, in English you might say, “She

shì piàoliang). THIS IS NOT CORRECT.  Chinese doesn’t use the verb 是(shì) with adjectives in this grammar pattern.


The final word is

漂亮(piàoliang) which means, “pretty.”  The definitions of the individual characters don’t help out much here, so it’s best to just remember them together as “pretty.” So all together we get, “She very pretty.”  Now you might be asking yourself, can I use the

长得(zhǎng de) in the answer? Sure.  Your answer would look like this,

You can replace 漂亮(piàoliang)in the answer with any one of the adjectives below to describe a person’s physical traits.

她是漂亮的 simply means "She is beautiful" in Chinese. Everyone can use this. It's a bit vague that people might wonder how beautiful she is.

There are some other expression for different level of 漂亮 if you want to make your opinion clearer:

1&2 are quite similiar to each other, they are both less than 很.

If I score them.  I would say,

Thanks for the tips Seraph!  The 是＋ Adjective + 的 pattern is great to know.  How would you translate #3 above into English? I've seen this pattern translated to something like this:

She is a pretty one!

是+的 combination works most of the time. (In this situation, if you think she is NOT VERY beautiful, just fairly beautiful.)