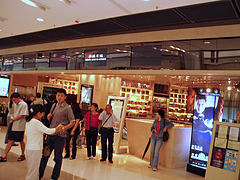 Last time we took a look at how to say, "What is she like?" in Chinese.  If you missed that discussion, take some time to go back and check it out.

Today we are catching up with a friend about what we did over the weekend and we are asking, "How was the movie?"  Here is the question and answer:

We’ve come a long way in only 19 question.  When we started out we could only ask and tell our names, and now we are about to give our opinions on films.  It feels very civilized, doesn’t it?  And you’ll be glad to know that 怎么样(zěnmeyàng) is back again so there is very little new stuff to learn in this lesson.  So let’s take a look.

The character 这(zhè) means, “this.”  Chinese doesn’t have a word for “the” so you’ll always need to use words like “this” and “that” in contexts where English might use “the.”  The next word 部(bù) is a
measure word for movies.  Measure words are used when you are pointing out an object (this pen, that pen) or when you are counting objects (1 pen, 2 pens, 3 pens). We have measure words in English too: a pair of pants, a flock of geese, a cup of coffee.  But there are lots more in Chinese and they are used more often.

To be honest, this is kind of a pain when you are first learning the language.  The best thing to do is just try to remember the measure words with their objects when they come up in context.  Trying to memorize all the measure words and the categories of things they measure, or count, isn’t really a good use of your time at this point.  Okay, enough about measure words.

The next word is
电影(diànyǐng).  This is a fantastic translation.  At this point you may not know that Chinese doesn’t create new characters for new words.  Instead they just recycle characters that already exist. So when new inventions pop up, Chinese has no choice but to dig through thousands of characters to match the symbols with the object.

The character
电(diàn) means “electric.”  The character
影(yǐng) means, “shadow.”  So together we get “electric shadow.”  That’s genuine poetry right there!  Finally we come to
怎么样(zěnmeyàng) which means, “how.” The rough literal translation is one that’s likely to stick with you, “This electric shadow how?”  Okay, let's take a look at the answer.

This answer starts out differently from the other  answers in this mini-怎么样(zěnmeyàng) series.  We are giving our opinion here so instead of starting out with a word for “it” we say 我(wǒ) which means, “I.”  The character 觉(jué) means “sense” or “feel.”

The character
得(de) is a particle that could translate as “ability” but it doesn’t really add much meaning in this context.  So you might want to think of
觉得(juéde) as “feel ability” just for the purpose of remembering the two characters.  We don’t need to use a word for “it” in the answer.

The next word is
很(hěn) which means “very.”   (Chinese does not use 是(shì) to describe objects with adjectives.  Check out
question #16 for details).  Finally we have
有意思(yǒu yìsi).  The character
有(yǒu) means, “to have.”  The character
意(yì) means “meaning” and
思(si) means “thinking” or “thought.”

So if something “has meaning thought” then it’s logical that it is interesting.  The rough translation to get you thinking in this Chinese sentence pattern is “I think very interesting.”

You can replace 部电影(bù diànyǐng) in the question with other diversions to ask questions about all kinds of entertainment.  Remember, each of the first characters is the measure word for each form of entertainment.

You can replace 有意思(yǒu yìsi) in the answer with any of the adjectives below.

Admin Comment by sikora on May 13, 2012 at 3:43am
Thanks Seraph! I copy and pasted the pinyin from google translate for 长. I changed the "z" to "c" but I didn't catch the third tone. All your suggestions are really helping to flesh out the details.

it should second tone.

1. I agree there are too many measure words in Chinese, almost everything has one. Now even Chinese don't take them very serious unless you are having a Chinese test in school. The trick is if you don't know which one to use, just use 个, you have a big chance to be right.

Above are used very common and we don't even notice that we use the wrong measure word. Maybe Chinese will correct you, but that's only because you are foreigner. :)

Btw, you want to add 一 before all your samples.

2. You explained 电影 so good, that I had to digg some. I just found this Chinese word 电影 was first time used in the year 1906.

3. I think it's better to take 有意思 as one word, meaning simply interesting. Because each character has its own meaning, and  意思 as a word has another meaning too.

Admin Comment by sikora on May 12, 2012 at 9:25am
Thanks Shu! The 美 definitely should have been 没。I'll be sure to go back and tidy things up.

bad / no good / below average / disappointing

美意思－Méiyìsi – not interesting, it is not 美， it is 没. I think you got a typo here.

Keep up the excellent work.