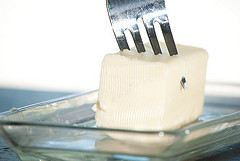 Last time we took a look at how to say,  "What do you want to do?"  in Chinese.  If you missed that discussion, take some time to  go back and check it out.

Today we are having some trouble with chopsticks and we're asking "Do you have a fork?"  Here is the question and answer:

Do you have a fork?  No.

When you are learning a foreign language sometimes the differences between it and your native language can be stark.  This is one of those times.  But before we begin to take a look at this question, you should know that there are two ways to ask it that are both very common in Chinese.

The question above is pretty exotic to English speakers, but it is a basic structure that you absolutely have to know, even as a beginner.  We’ll take a look at the other way to ask this question later on. The question above is what we call a “yes/no” question because when you ask it you can simply reply with “yes” or “no.”  The word choice isn’t so different from English but the structure makes it sound very blunt.  Here is the literal translation:  "You have not have fork?"

We can structure the question like this in English too: “Do you have a fork or not?” or “Do you or don’t you have a fork?”  But this structure in English almost always implies that the person asking the question has just about had it with the other person and wants to know once and for all about the fork in question.   But in Chinese this is perfectly normal and doesn’t hold any implications about the person’s emotional state.  Notice that the Chinese question doesn’t use “Do…” at the beginning.

We also don’t have to use “a” before “fork.”  Chinese is very streamlined in this way.  There are no words for “a” and “the” in Chinese.  There are ways to ask about “this” “that” “these” and “those” and you can also ask about numbers of things.  But if you are just wondering if someone has something in general, like a fork, a pen or a phone, then you just follow the pattern in the question above.  Now let’s look at the answer again:

Do you notice something strange about how this kind of question is answered?  After seeing the question, the answer sure does look logical.  It simply says,  "Not have." And yes, it is quite short, but the English equivalent, “no,” is even shorter.

Hmmm…  Well, this is a “yes/no” question but notice that there is no “no” (or yes) in our answer.  There is a negative word,  没(méi), but “no” doesn’t show up as it would in English.

For example, in English a full answer to this “yes/no” question would be “No, I don’t have a fork.”  But in Chinese there are no words for “yes” and “no!”  So now you maybe you are wondering what the person might say if he did have a fork.

In that case, the answer would be,  有(yǒu).  In Chinese you need to answer “yes/no” questions by repeating the verb in the question for “yes” or by putting a negative word in front of the verb for “no.”  This happens often and it doesn’t happen with just verbs.  Adjectives can follow the same pattern.  But that’s getting a little ahead of ourselves.  Let’s look at this structure in some other common verb examples.

But… before we do that, you need to know that  没(méi) is used to negate the verb  有(yǒu).  But you also need to know that  没(méi)  IS NOT used to negate most verbs.  The word  不(bù)gets the job of putting a slash through your average verb.  Both words are negative and both would translate to “not” in this context.  Below are some other common “yes/no” questions. You can choose to add the pronoun at the beginning of the sentence or leave it out.

*Check out how the two character verbs  喜欢(xǐhuan) and  可以(kěyǐ) can be shortened to just the first character in front of  不(bù)in this pattern.  You don’t have to shorten it, but it is very common and a lot less cumbersome to say.

The verb  有(yǒu) in our question  你有没有叉子? means “have.”  But if we leave out the pronoun  你(nǐ) we would translate this question a little differently.  So in the question  有没有叉子? the verb  有(yǒu) might better be translated as “there is” as in, “Is there a fork (around here)?” or literally, “There is, there is not a fork?”

This is very simple but important to know.  In English for example, if you want to know if someone is occupying a restroom you may ask at the door, “Is there someone in there?” but we would probably not say “Are YOU in there?” unless you were pretty certain of who was the occupant.  Similarly, in Chinese asking  有没有人？(Yǒu méiyǒu rén? – Is there a person or not?) is a less personal question.  So to sum up this point,  你有没有… means, “Do you or don’t you have…”  and  有没有 (Yǒu méiyǒu…?) means,  “Is there or isn’t there…?”

The other way to ask our yes/no question,  “Do you have a fork?”  is  你有叉子吗？ (Nǐ yǒu chāzi ma?)  The word order in this question matches up well with English,  “You have fork (question particle)?”  Here the  吗 just tells us that this is a question, similar to how  “Do” signifies a question in the English question.   This is also a very common pattern and while adding  吗 is the easier way to go for English speakers, it is still just as important to be able to use the  有没有 (and the “Verb不 Verb”) pattern.

Below are some things that you might want to ask if a person has, or not.  Just replace  叉子 in the question  你有没有叉子?  with one of the things from the list below.

And there's another way to ask this question:   叉子有没有？ or  叉子有吗？

It might look weird, but we do say it often. :)  It applies in other things(nouns) too.