Chinese chéngyǔ explained - 梁上君子 - How to say a thief, a burglar, or a person who divorced from reality

In the Eastern Han Dynasty, there was a man named Chen Shi (陈寔). One day, a thief slipped into his living-room. 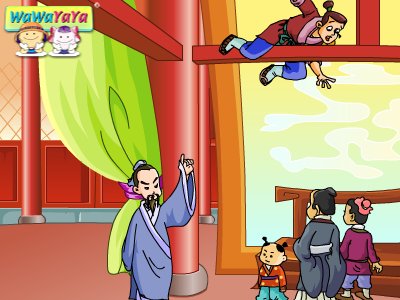 Hiding behind the beam, the thief waited for Chen Shi to fall asleep. Chen Shi, finding the thief, called his family together, saying, "To be a upright man one must have aspirations. Men are not born evil. But if one gets used to doing evil things, it will be hard to reform. The gentleman above the beam is such a man." The thief, hearing this, hurriedly jumped down and knelt on the ground to beg forgiveness.

This idiom is used to refer to a thief, a burglar. And now it also refers to a person who divorced from reality.

Thanks again, Wenzhuo!
yes, I'd do the same as well but it's because I'm a short stories lover, especially this story with colourful picture!
No worries, I can understand you perfectly! keepp up the good work!
I'd love to read more stories! hehe :D

I agree with Gen!  I know my 4 yr old son would find such story's really interesting.  I also find Chinese idioms so interesting! thanks for sharing!

You are always welcome! I read this idiom from my uncle's 4-year old daughter's book, I thought that Chinese learners might be interested, so I wrote today's blog. I'm pretty sure there must be some grammar mistakes in my sentences, really hope it wouldn't bother you and others! :)

This could make a great short story telling session for kids!
Thank you Wenzhuo!