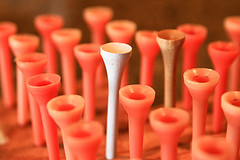 In this world, success could be defined in a way of "being able to stand out from the crowd, being unique and wonderful. " if you think you're a real gold, then go ahead shine brighter than others, prove yourself and let people know you can make bigger difference to the world than others.

It might sound cruel, but that seems more or less the game rule of today's world. China is no exception. Therefore today we'll learn some Chinese words and idioms that describe the status of being standing out from the crowd :

If you wanna know the original story behind the above idioms and learn how to use them in you spoken Chinese, you can check them out here:
Read a Chinese history story, learn a Chinese idiom – 脱颖而出
Chinese idiom 出类拔萃 – The great expectation that Chinese parents hav...

Good tips, Thomas. There’s another fun word: 出格. “格” means “square, mesh”, it indicates social rules and conventions. A person that “出格” is a person that is out of the common social conventions, a more rebelliant kind of creature.

Like when one reads 出現 =  Appear ( Appear Out ) if used as a verb  and  appearance  if used as a  noun  ....   現  means  present or current when used as an adjective or means appear as a verb.

出道 ( Chūdào  ) literally can be explained as "set off on the road", which is easily to be related to "debut". The character 出 is 出道 and 出众 is actually different, one is "stand out", one is "come out". They're related and different.

It's good practice to compare the meaning of 出 between the two words, thanks Thomas!