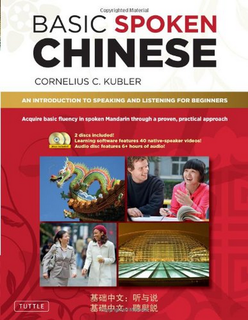 I have been reading and studying a fairly new set of Mandarin Language textbooks known as the “Tuttle Basic Chinese Series” that can be used in the AP level High School or College classroom or by people studying on their own. I will only review the first book in the series “Basic Spoken Chinese” BSC at this time. At later times I will review other volumes in the “Tuttle…

Michael Hurwitz over at "Yoyo Chinese The Official Blog" has written a fine article ( in English ) about some of the US/UK TV shows that are now popular in China.

"Thanks to the advent of Chinese streaming services like Sohu and Youku, it’s easier than ever for Chinese fans to watch their favorite foreign TV shows.

While pirated versions have been available online for years, lately Western content providers have struck…

A May 29, 2014  article over at "The World of Chinese" Internet Site by  Keoni Everington (华武杰) does a good job of scratching the surface of the baffling differences between Taiwan Mandarin and Beijing Mandarin.  ( It may be relatively baffling probably only to the mostly European language based members of the SMC Site ).  Read the article and some of those unknown words you have heard in a Taiwanese movie or song may now make sense.  Here is the link:

Olle Linge Points Out Problems With Listening to Chinese

Olle Linge over at Mandarin.about.com has posted an article of the difficulties involved in listening and understanding what one hears in Mandarin. It is even worse in the real world where sometimes you must determine which language is being spoken and if the speaker is saying a word wrong or using a slang word or mixing languages.  It is not uncommon to hear sentences consisting of Mandarin, Cantonese and English all mixed together in some Chinatowns.

Greg at Mandarin Segments recently wrote an article that claims that Mandarin learners should think of the neutral ( untoned ) tone as a fifth tone and makes a number of good points and examples.  In the comments to the article Olle…

Lily's Wai Sek Hong ( lilysbest,blogspot.com ) has posted a very extensive and useful list of cooking ingredients in written Chinese and English.  This list can be used to help in understanding cooking videos seen on the internet that are in Mandarin, Cantonese, Hokkien or any other language that uses the written Chinese system.  { Only a maybe because all these languages ( and sub regions ) sometimes use their own words to describe things }.  The list can also be used as a vocabulary…

Five Mandarin Greetings that are Not "Ni Hao"

Dave Flynn at   http://chinesehacks.com    has posted an article on ways to say "hello: that are not "Ni Hao".

On YangYang's Blog -- Ways to say Good Bye in Mandarin

Over on YangYang's Blog ( yoyochinese.com ) there is an article by   Julie Tha Gyaw  on different ways to say Good Bye  in Mandarin.  Check it out at this link:

I recently visited the easymandarin site and they had a great list of Mandarin Football ( soccer ) and World Cup words. See the list at this link:

Articles of Interest over on East Asian Student Net

I recently visited I site I have neglected to go on for probably 1 year.  That was a big mistake not reading the excellent articles posted at this excellent site.   Here are the first 4 articles I read.

The first article I read was the book review of "Tuttle Reading and Writing Chinese" and, having read about 1/2 of this book, I totally agreed with the review.

The second article I read was "China to…

Nicole Yin has authored 2 articles over on italki.com that should be looked at by most Chinese learners.  These articles are about the Informal Chinese Interjections ( that you are sometimes hearing while at a Chinese eatery, supermarket or watching a Chinese movie ).

Basic Cantonese Phrases and other Rory Boland Posts on About.com

UK born Irishman Rory Boland (   http://gohongkong.about.com/bio/Rory-Boland-23726.htm   ) writes Hong Kong and Cantonese Blogs on his Blogsite HONG KONG MACAU TRAVEL on the website About,com.  Here are links to a few of them:

The Mandarin Words for Gifts and Good Manners

The site "Learn Chinese Weekly" has posted this Dec 25 related blog.  Learn Mandarin words for gifts, some seasonal greetings and the words expressing good and bad manners.  This is a very good site and even lists "Study More Chinese" as one of the recommended alternate Chinese learning site.

Who is General Yue Fei ?

If you have seen the names Yue Fei or General Yue Fei or/and are curious about the Chinese history  of 1000 years ago, then this is an exciting article for you ( from January 2008 granitestudio.org web site ):

The idiom 刮目相看 (guā mù xiāng kàn), translated as “look at a person with new eyes,” originates from a description of Lü Meng(1), the outstanding general of the Wu state in the Chinese historical text Records of the Three Kingdoms.  The Epoch Times has a nice posting on this idiom at this link:

The words 借 (jiè), 借给 (jiègěi) and 跟…借 (gēn…jiè) in Mandarin Chinese are all used to talk about borrowing and lending.  Whilst English has separate words for “to borrow” and “to lend” , Mandarin Chinese just has 借 to cover both senses of money ( or object ) flow.  Which one it means depends on how the sentence is structured.  A nice posting on this subject is at this link:

The most common situations where 在 (zài) comes after the verb

In Chinese grammar, the preposition 在 (zài) can sometimes appear after the verb. This can be confusing for people learning Chinese, because in many prepositions like 在 come before the verb.  See the FluentU posting on this Mandarin Chinese Grammar point here:

The word 给 (gěi) is often used in Mandarin Chinese as a preposition meaning “for” or “to”. In other words, 给 can be used to talk about doing something for someone or to someone. One way to do this is with so-called verb-给 compounds which simply means is a verb immediately followed by 给.  A fine posting of this topic is at this link: